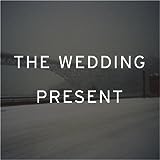 Fears that the death of veteran DJ John Peel would sound the death knell for many of the bands he vociferously championed are proved groundless by the arrival of Take Fountain, the first album in nine years from Dave Gedge’s The Wedding Present. A return to the brittle, sometimes wry indie-rock sound of yore, the brooding likes of “Mars Sparkles Down On Me” will primarily be of interest to long-time Gedge fans dissatisfied by the broadly pop lean of his presently more prolific outfit, Cinerama. Lyrically, we’re still in familiar realms – that is, love affairs, and the inevitable roads to failure that lie therein. But beyond the cigarettes-and-cardigans sound of the ’80s bedsit lurk occasionally surprising ambitions: take the horn-accompanied “Always The One”, a gloomily British take on the music of the Spaghetti Western, or “Interstate 5 (Extended Version)” – a sweeping, dramatic number that wears epic pretensions, and what’s more, neatly succeeds in pulling them off. –Louis Pattison

This website uses cookies to improve your experience while you navigate through the website. Out of these, the cookies that are categorized as necessary are stored on your browser as they are essential for the working of basic functionalities of the website. We also use third-party cookies that help us analyze and understand how you use this website. These cookies will be stored in your browser only with your consent. You also have the option to opt-out of these cookies. But opting out of some of these cookies may affect your browsing experience.
Necessary Always Enabled

Any cookies that may not be particularly necessary for the website to function and is used specifically to collect user personal data via analytics, ads, other embedded contents are termed as non-necessary cookies. It is mandatory to procure user consent prior to running these cookies on your website.