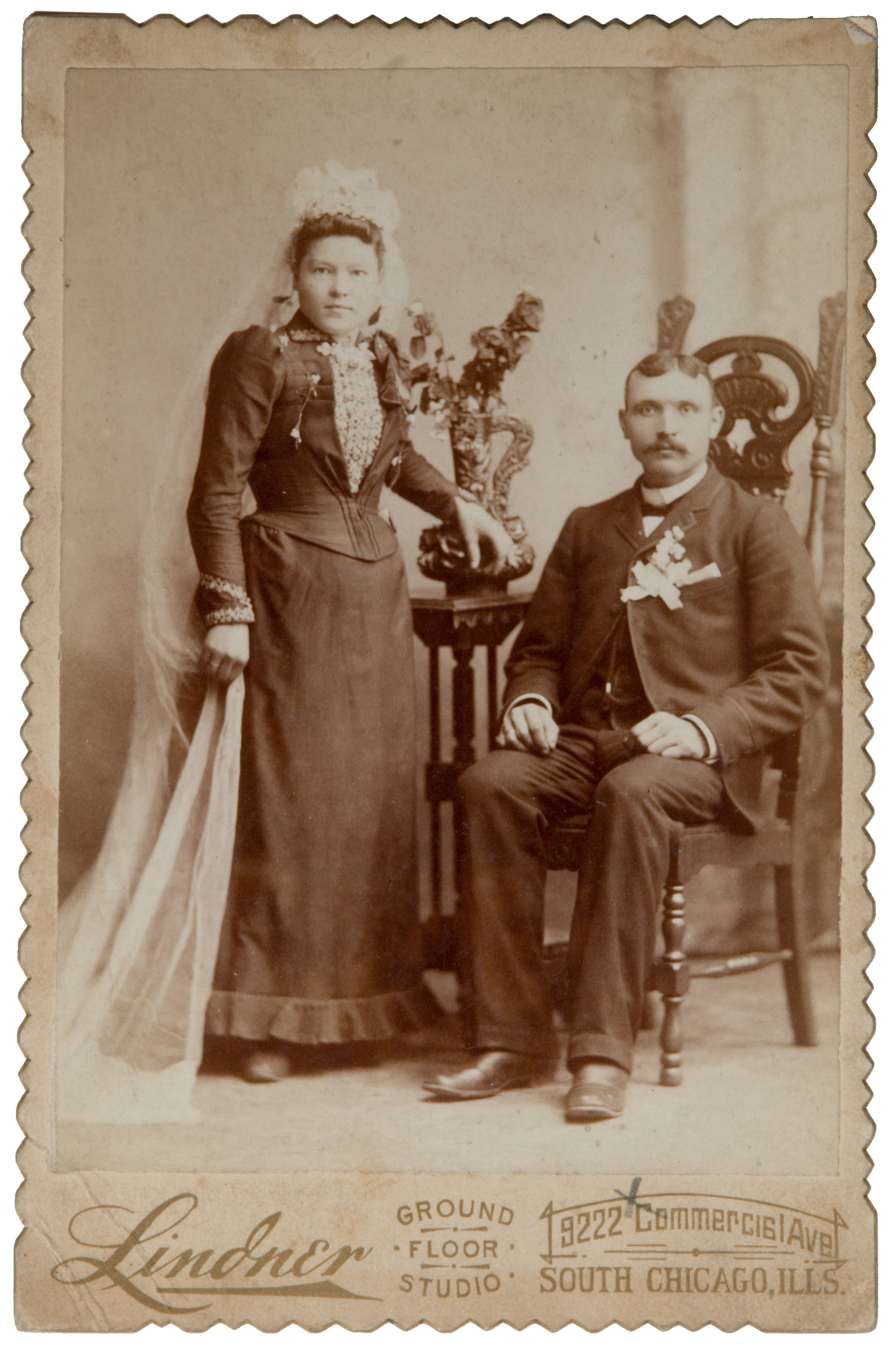 A white wedding is a traditional formal or semi-formal wedding originating in Great Britain.

The term originates from the white colour of the wedding dress, which first became popular with Victorian era elites after Queen Victoria wore a white lace dress at her wedding. The term now also encapsulates the entire Western wedding routine, especially in the Christian religious tradition, which generally includes a ceremony during which the marriage begins, followed by a reception.

Though Mary, Queen of Scots, wore a white wedding gown in 1559 when she married her first husband, Francis Dauphin of France, the tradition of a white wedding dress is commonly credited to Queen Victoria’s choice to wear a white court dress at her wedding to Prince Albert in 1840. Debutantes had long been required to wear white court dresses for their first presentation at court, at a “Drawing Room” where they were introduced to the queen for the first time.

Royal brides before Victoria did not typically wear white, instead choosing “heavy brocaded gowns embroidered with white and silver thread,” with red being a particularly popular colour in Western Europe more generally. European and American brides had been wearing a plethora of colours, including blue, yellow, and practical colours like black, brown, or gray. As accounts of Victoria’s wedding spread across the Atlantic and throughout Europe, elites followed her lead. After Queen Victoria’s and Prince Albert’s wedding, the color white resembled wealth and social status.

Because of the limitations of laundering techniques before the later part of the 20th century, white dresses provided an opportunity for conspicuous consumption. They were favored primarily as a way to show the world that the bride’s family was so wealthy and so firmly part of the leisure class that the bride would choose an elaborate dress that could be ruined by any sort of work or spill.

Although women were required to wear veils in many churches through at least the 19th century, the resurgence of the wedding veil as a symbol of the bride, and its use even when not required by the bride’s religion, coincided with societal emphasis on women being modest and well-behaved.

Etiquette books then began to turn the practice into a tradition and the white gown soon became a popular symbol of status that also carried “a connotation of innocence and virginal purity.” The story put out about the wedding veil was that decorous brides were naturally too timid to show their faces in public until they were married.

By the end of the 19th century the white dress was the garment of choice for elite brides on both sides of the Atlantic. However, middle-class British and American brides did not adopt the trend fully until after World War II. With increased prosperity in the 20th century, the tradition also grew to include the practice of wearing the dress only once. As historian Vicky Howard writes, “[i]f a bride wore white in the nineteenth century, it was acceptable and likely that she wore her gown again”. Even Queen Victoria had her famous lace wedding dress re-styled for later use.

The portrayal of weddings in Hollywood movies, particularly immediately after World War II, helped crystallize and homogenize the white wedding into a normative form.

The white wedding style was given another significant boost in 1981, when three-quarter billion people—one out of six people around the globe—watched Charles, Prince of Wales marry Diana Spencer in her elaborate white taffeta dress with a 25-foot-long train. This wedding is generally considered the most influential white wedding of the 20th century.

The traditional white wedding wasn’t necessarily defined by the color of the dress only. The wedding of Queen Victoria’s daughter Victoria, to Prince Fredrick William of Prussia in 1858 also introduced choral music to the processional when standard practice had been to have music of any kind only during a party after the wedding ceremony.

After World War I, as full-scale formal weddings began to be desired by the mothers of brides who did not have a permanent social secretary, the position of the wedding planner, who could coordinate the printer, florist, caterer, and seamstress, began to assume importance. The first edition of Bride’s Magazine was published in 1934 as a newspaper advertising insert called “So You’re Going to Get Married!” in a column titled “To the Bride”, and its rival Modern Bride began publishing in 1949. Today a whole industry surrounds the provision of such weddings.

The full white wedding experience today typically requires the family to arrange for or purchase printed or engraved wedding invitations, musicians, decorations such as flowers or candles, clothes and flowers for bridesmaids, groomsmen, a flower girl, and a ring bearer. They may also add optional features, such as a guest book or commemorative wedding leaflets. It is common to have a celebration after the wedding ceremony, normally featuring a large white wedding cake.

A subtle shift in the requirements for a wedding can be detected in the modern blurb for Emily Post’s Weddings “creating a wedding experience that demonstrates the bride and groom’s commitment and uniqueness.” “Uniqueness” is a modern addition to a wedding’s requirements.

Traditional weddings require, in addition to the bride and groom, a marriage officiant, which is a minister, priest, rabbi, imam, or civil officer who is authorized to perform marriages.

Typical white weddings also include a wedding party, which consists of some or all of the following:

Typically, these positions are filled by close friends of the bride and groom; being asked to serve in these capacities is seen as an honor, and typically entails some expense.

When the guests arrive for a wedding, the ushers, if any, help the guests take their places. In a typical white wedding ceremony, which is derived primarily from the Anglican tradition, the bride and groom will stand side by side at the front of the church or other venue throughout most or all the ceremony. Consequently, some guests prefer to sit on the side closer to the person they know best. Typically, this means that the bride’s family sits on the house left and the groom’s family on house right. The front rows are generally reserved for close family members or friends.

Depending on the country, her age and situation, and her personal preferences, the bride may walk alone or be escorted by her father, both of her parents, one or more relatives she wishes to honor, or the groom. In Swedish white weddings, the bride and groom usually go down the aisle together. Similarly, some couples choose to have the groom escorted to the altar by his family.

Whether the bride is the first or the last of the wedding party to enter the church varies by country. In the US, the bride is typically last, being preceded by the rest of the wedding party. In the UK, she leads the procession, followed by any bridesmaids, flower girls and page boys. Sometimes the groom is already present in the church; other times, he and any groomsmen form part of the procession. The music played during this procession is commonly called a wedding march, no matter what songs are played.

If the wedding is part of a religious service, then technically the service begins after the arrival of the participants, commonly with a prayer, blessing, or ritual greeting. During the ceremony, each partner in the couple makes marriage vows to the other in front of the marriage officiant. The ceremony might include the singing of hymns or performance of a popular song, a Bible reading, or a poem.

Afterward, guests may cheer the departure of the couple from the church by throwing flower petals, confetti, birdseed, or rice over them. Miniature containers of bubbles are often provided to guest to blow at the couple instead of throwing the previously mentioned items.

After this, the celebrations shift to a reception at which the newly married couple, as the guests of honor, and the hosts and perhaps members of the wedding party greet the guests in a receiving line. Although now commonly called a reception no matter the style of party, wedding celebrations range from simple receptions to dinner parties to grand wedding balls.

Food is served, with wedding cake for dessert. Wedding cakes are often multi-tiered layer cakes that are elaborately decorated with white icing. Cutting the wedding cake is often turned into a ritual, complete with sharing a symbolic bite of the cake in a rite that harks back to the pagan confarreatio weddings in ancient Rome.

During the reception, a number of short speeches and/or toasts may be given in honor of the couple.

If there is dancing, the bride and groom, as the guests of honor, are expected to be the first people to begin dancing. This is usually termed the “bridal waltz” to a love song, even if the couple has arranged for a different style of music and dancing. In Denmark, it is still normal to dance the first dance as a couple to waltz. Some families then contrive a series of arranged dances between the newlyweds and their parents, or other members of the wedding party, with guests expected to watch the performances.

At some point, the married couple may become the object of a charivari, a good-natured hazing of the newly married couple. The nature depends upon the circumstances. In India and other South Asian cultures, guests may try to steal the groom’s shoes when he removes them for a religious ceremony and later sell them back to him. This game is sometimes called joota chupai. In Western cultures, guests might tie tin cans or a sign saying “Just Married” to the bumper of the couple’s car, if they depart in their own car rather than a hired one.

As the guests of honor, the newly married couple is the first to leave the party. From ancient Rome through the Middle Ages in Europe, wheat kernels were thrown at the bride in a wish for affluence; now it is typical to throw rice, as a symbol of fertility, at the couple as they depart.

This website uses cookies to improve your experience while you navigate through the website. Out of these, the cookies that are categorized as necessary are stored on your browser as they are essential for the working of basic functionalities of the website. We also use third-party cookies that help us analyze and understand how you use this website. These cookies will be stored in your browser only with your consent. You also have the option to opt-out of these cookies. But opting out of some of these cookies may affect your browsing experience.
Necessary Always Enabled
Necessary cookies are absolutely essential for the website to function properly. This category only includes cookies that ensures basic functionalities and security features of the website. These cookies do not store any personal information.
Non-necessary
Any cookies that may not be particularly necessary for the website to function and is used specifically to collect user personal data via analytics, ads, other embedded contents are termed as non-necessary cookies. It is mandatory to procure user consent prior to running these cookies on your website.
SAVE & ACCEPT